the dangers of chasing tennis balls in the mud

Dilly-dog has loved living here in hilly Wales, not just because it means she can cuddle Steve whenever she wants, but because there are 3 playmates next door. Steves parents have 3 dogs and they enjoy having a walk ... or that should be run, together. Recently we have been hitting a tennis ball for them to chase, one will get it and bring it back then they go again ... Dilly and Mossy especially collide sometimes, and skid to a halt and Mossy has even done somersaults! 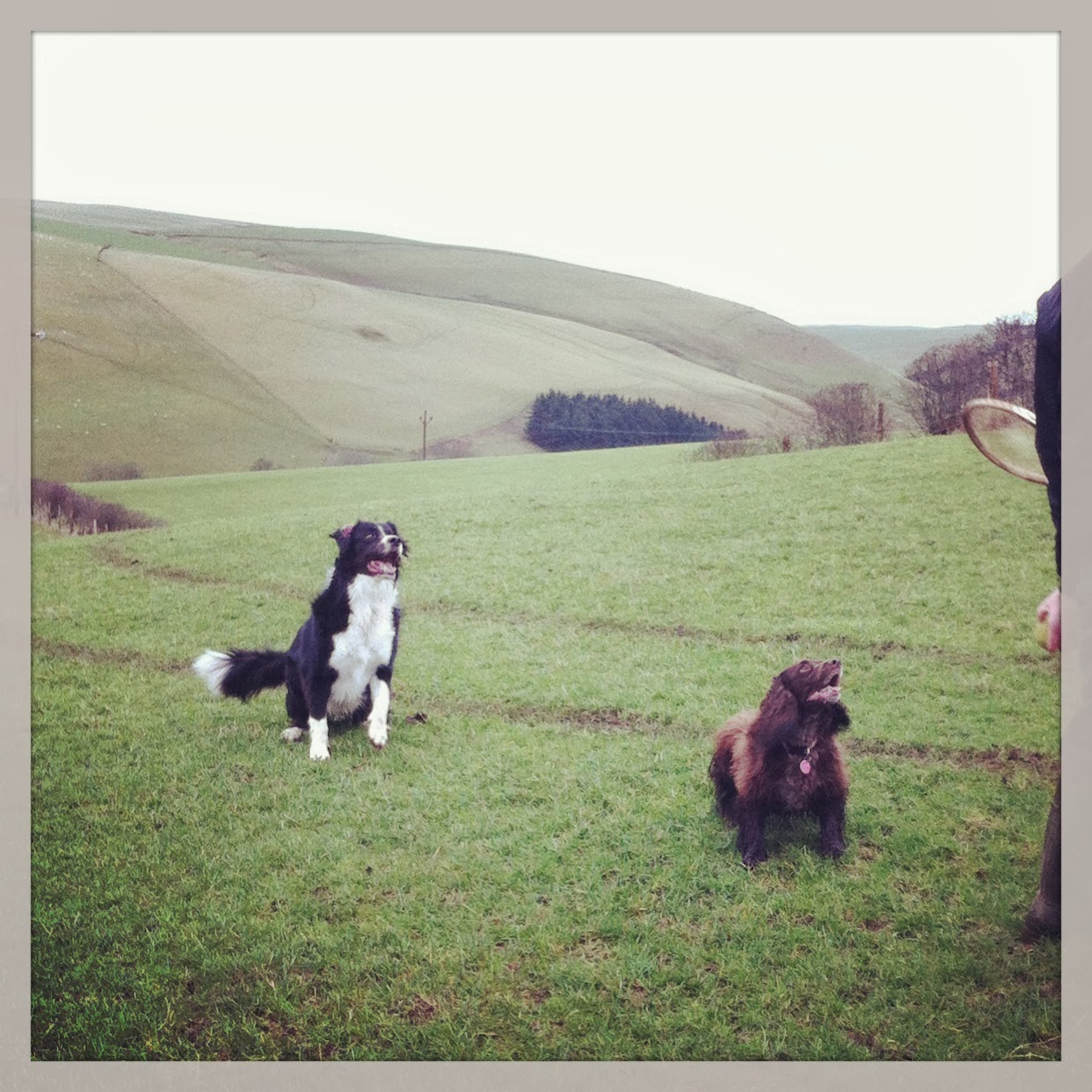 Last Thursday Steve and I were out enjoying a muddy walk and Dilly who can run like a little bullet, was chasing the ball, skidded to a halt and yelped out in pain! We think she did the splits ... she came back to us with the ball in her mouth but dragging her back legs like she was paralysed! Steve picked her up and we went home. Back in his mum and dads place we put her down, she seemed happy enough, her tail was wagging and was trying to walk. Her foot was twisted back sometimes and she was very wobbly ... but within 10 minutes she seemed a little more steady. We decided to go home, wrap her up warm and cuddle her on the sofa for a bit and see if she improved.

After an hour, although she could walk a bit more, she was very very wobbly so we decided to take her to the vet. He gave her a large steroid injection and said it looked like she had nerve damage, which is why she didn't seem to be in pain, but it could also be a slipped disk. If there was no improvement by the morning then she should really go for an x-ray, which although wouldn't show nerve or muscle damage, would show up a broken bone, but as she wasn't in pain, he didn't think it was that. If she didn't go for an x-ray then we should go back on Monday.

Friday she seemed a little stiff when she woke up, but apart from wobbling a lot when she walked, she was able to do her doggy-business and seemed quite happy. Saturday she seemed about the same, but Sunday she was more subdued and we think its because the steroid injection was wearing off.

So yesterday Dilly and I went back to the vets with my mum. I thought she had been doing a lot better, she was wobbling less and her back seemed more straight, not so hunched ... mum even thought, 'is it worth going back?' Time and rest have always healed her pulled muscles before (apart from when she damaged her neck last October, but she was in obvious agony then and needed some strong drugs to help her heal) As soon as we walked in the vet said he was really concerned that she was not 'better', as in 'completely' better. If it had been muscular then she should be. Which made him pretty sure it was a slipped disk (which is actually a burst disk really.) He said about 20 times ... 'I want to scare you! ... she needs to completely rest ... she must not jump up or down, she must not walk up and down stairs ... She really should be in a cage to keep her from over doing it for a few weeks and then still totally resting for a few more weeks!!'

It did scare me. The lack of feeling means she can damage herself even more and it would probably be permanent and she would become paralysed and loose her bodily functions, which would not be a quality of life that she could live with :(

This is going to be a hard month as she seems to have woken up this morning wanting to try and run and jump ... I am not sure if the new pills she has been given are making her feel a bit better, but she seem to be more lively today than she has been since she did it. We have penned off a corner of the living room (it can also be moved to the kitchen where she can see out) with her bed and drink to try and keep her calm so hopefully it will work!

I just want to warn you that if you do let your dog chase tennis balls, especially if you hit them and they go further, then although it seems like a good way to get them to have a good run, be careful as its probably better to let them run at their own pace and not skid to a halt in the mud!
Labels: dilly dog wales walk winter