living with a wolf

we have had Timber-Alasky for 4 days now and boy does he make me realise I was very lucky with Dilly-dog. She didn't cry for her mummy when I first got her, she only chewed one chair leg, she had some house-toilet-training and I don't remember her biting me ... I did get her in July though, so it was sunny out side so house training was easier! 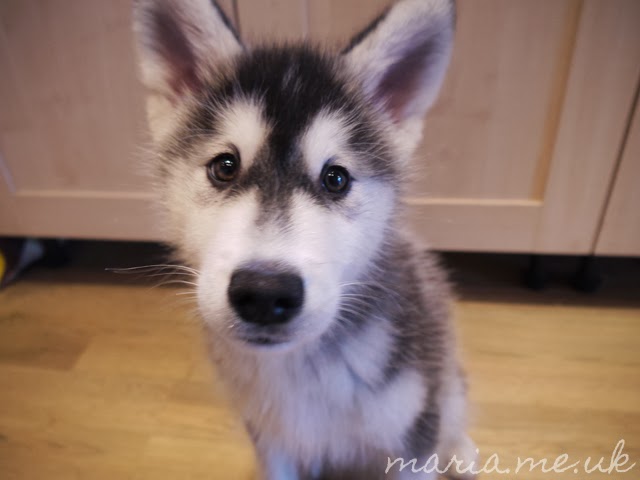 Steve's sister got a little black cocker spaniel puppy a month ago and we saw her again yesterday ... she has grown so much in the last few weeks and so much reminds me of dilly-dog and Gracie but she is still tiny compared to Timber who is the same size as Dilly (a fully grown cocker spaniel) and he is a week younger than her! His size does make you forget that he is only 12 weeks old ... that he is still a very young puppy.

He has the sweetest cuddly nature ... he loves cuddles, he loves following you around and unlike dilly who's paws make a bit of noise on the floor, his are so furry that you don't hear him and are constantly tripping up over him. He curls up by my feet while I am washing up and every time I look down he is gazing up at me ... I must admit my heart does melt! He isn't really house trained and he seemed pretty scared of the outside. The poor little mite has had really bad diarrhea too, we are hoping its just change of diet and stress from the change in his life and nothing serious, but we are keeping and eye on him. The first night we used an old fire guard and penned off the side of Steve's bed. Poor Steve had to keep his arm in the pen, stroking his head, or he would howl! not the most comfy night for Steve :( the next day we managed to get a cage for him from the paper ... its 3 foot x 4 foot so will fit him when he is full grown too ... unfortunately (or fortunately) it won't fit in our bedroom, so he is taking up the hallway (we can't use the front door at the moment!!) The first night in his cage, he howled ... all night ... and this is no ordinary howl ... Steve has had many dogs before and he says he has never heard anything like this before except on tv ... this is a wolf howl ... the next night we moved Dilly's bed next to him and he only howled for 2 hours (only!!) last night we put a ticking clock on top of the cage and guess what it was 5 mins of howling!!! whooo!! we have been feeding him in there so he thinks of it as a nice place to be (also helps with greedy-chops-dilly from not trying to get his food!)

I left him today in his cage for an hour while I popped to the post and shop ... I could hear him howling through the car window when I got back, but Steves dad just said he didn't howl the whole time, which is good! When I got back I had a cuddle on the sofa with the two wooflets ... one on my left and one on my right ... there is nothing like sleeping dogs right! haha 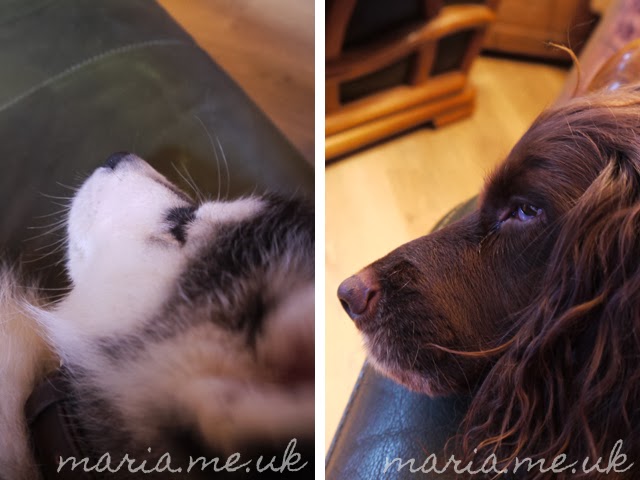 his fur is just like wool ... its a double coat and every part of him seems to be covered in it ... his ears are like velvet and the inside is furry too!

Dilly dog is quite happy to have him around ... except if there is a chance that he will get food that she should be getting or first thing in the morning when we have a cuddle on the bed ... she isn't sure about that either, but the rest of the time she plays with him and licks him and doesn't seem to bothered about sleeping next to him too. (I seem to remember she was the same with my sister in laws puppy, Gracie ... suddenly became frantic about food and didn't like Gracie on my bed)

I never thought I would be sharing my home with a wolf but I wouldn't change him!
Labels: alaskan malamute dilly dog husky puppy timber