the ballad of steve and maria

my mum wrote this for our wedding and my dad read it out during his speech! 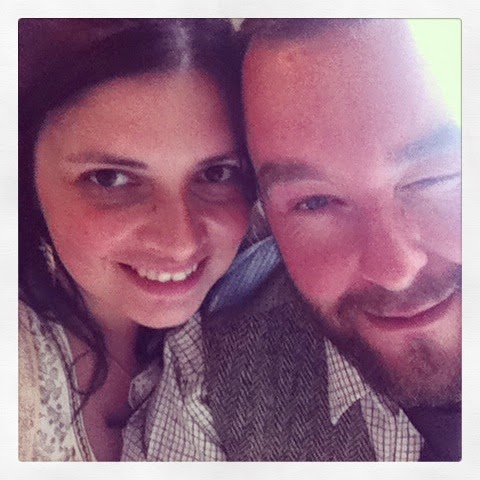 Let’s introduce our heroine first,
who this ambition has always nursed.

To marry a countryman, strong and true,
for this has always been her view.

Maria grew up with brothers four,
living for years by the Cornish shore.

She moved to England to live in Sus-sex,
to share a house with Joe and Bex,

while Mum and Dad to Leominster did go,
to retire to a nice little bungalow.

Later she moved in, with Mother and Pop,
and got a job at a women’s clothes shop.

Now Maria we must leave,
to introduce our hero Steve!

Steve grew up near Llandrindod Wells,
by the Radnor Forest, as our story tells.

Not a lover of the great indoors,
he would much rather walk out on the moors.

With twinkling blue eyes, and heart of gold,
He feels most at home in a wide sheep fold.

Working in his beloved hills,
our capable hero has many skills.

Shepherding, building, plumbing, this man
travels to work in a nice white van.

One day he had a call to ask
if he would take on a different task.

Refitting a shop he was asked to do,
shelving and flooring and painting too.

Now in this shop a dark haired beauty
was serving the ladies, doing her duty.

When on her, his blue eyes fell,
his beating heart, he could not quell!

For in this shop, called “Jumping Ships”
He first met Maria, and her luscious lips.

Whenever he saw her his heart would melt,
but she had no idea how he felt!

Some months later he was asked to go
to Birmingham, to a fashion show.

He had to do a delivery, you see
for the shop had a stand at the NEC.

Then destiny gave him such a gift
He was asked to give Maria a lift.

This meant them sitting side by side,
for two whole hours..... What a ride!

Who knows what this might’ve led to?
But another sat there, George, his nephew!

Maria began texting with a mysterious smile,
and then admitted, as she has no guile,

That she and Steve found lots to say,
and they had a date on New Year’s Day.

When he came to the shop with a delivery,
Maria asked, “Can you help me?”

“Can you help me carry these upstairs?”
The manageress was busy with her cares.

Once up there she grabbed him for a kiss!
Did he resist? No, what bliss!

Downstairs her boss had no idea
what was happening up here!

Many outings took place in that van,
This dark-eyed wench and this blue-eyed man.

With stops at many a lay- by,
I really, really wonder why!

As well as this demanding role,
Steve took on another goal.

To build a house for them, no less,
and this he did with complete success.

With his dad’s help, and lots of wood,
he built a house that’s really good!

Now while Maria cooks her stews,
she gazes out at amazing views!

Castle mound, trees and hill,
farms and sheep and a tall wind mill.

We haven’t mentioned Maria’s dog.
Dilly, her spaniel, was all agog.

When she met Steve, she fell in love too.
and loves him as much as Maria do!

Now they have a Alaskan Malamute.
If he didn’t chew the house, he’d be quite cute!

As Maria was planning their green-checked day,
Steve said, “Gingham suits, No way!”

Now our ballad must draw to a close.
Our hero has found his English rose

And as we have seen, since our ballad began,
our heroine has found her country man.